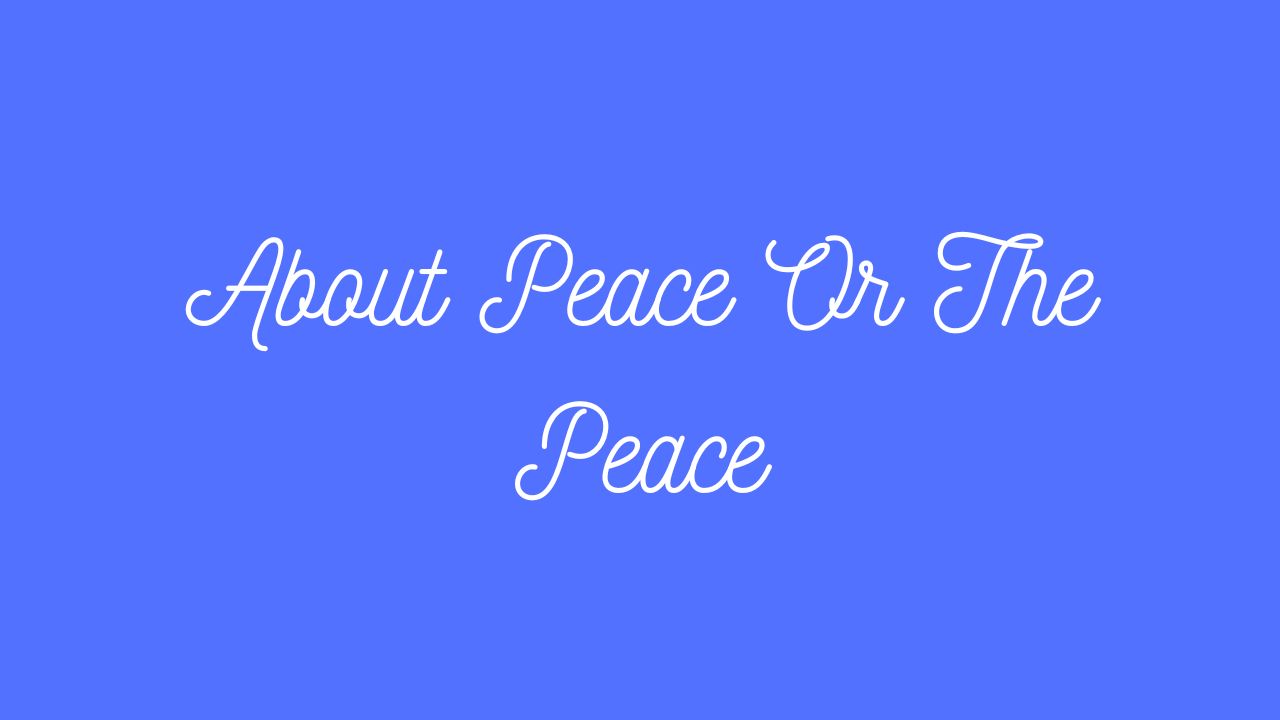 About Peace Or The Peace

Peace and happiness in life is a desire of every human.
Is it a goal of life, which we shall achieve one day?
If you don’t have it then it may be a goal for you.
Otherwise it a basic requirement of a human.
We want to talk peacefully, eat peacefully,
walk peacefully, sleep peacefully, and whatnot.

The definition of peace cannot be
argued but context can be. Why?
Because the definition is your own and
it is indicating towards resentfulness of your mind.
Context is debatable because
other people’s opinions come on the way.
Everybody wants their festival celebration
should be peaceful but others may think it is not peaceful for them.

If these powerful contemporary humans and king
didn’t agree on their wrongful doing
then we are just a blade of grass.

Day to day unrest of larger society lead to
serious conflict and then fight and
finally annihilation of one by other.

Who became peaceful after the war
of Rama, Krishna, Jesus, Mohammad, Hitler?
(if you are emotional about keeping/not keeping
some name in this list then wait, read and think,
and don’t take me wrong)
Who suffered in that war for peace?

We keep weapons at home for what? defense or attack?
Arms manufacturers are having a strong business
and almost every American has
some kind of weapon at his home for peace!

In the north of India in villages, every well-doing family
has a country-made weapon at home for peace!
Nation develop a nuclear weapon for peace!
They threaten to annihilate each other for peace!
The human rights commission wants to preach peace
and they themselves are biased and a bunch of hypocrites.

The way of peace is war?
Only a powerful win and gets peace for themselves.
Winner writes whatever she/he wants in the history.
That is why the history of war and peace
should not be read from one book.

We read the history of the war for peace
but the history is sponsored by the winning king,
and we assume it is The Truth.

In relation to the word “peace” & “truth”
we human are extremely hypocrite
We talk about peace, organize conferences,
give awards to others but “do” very little for “peace for all”.

Similarly, we talk about the power of truth,
we even go to an extend and say Truth is God.
But we talk very less truth in our day to day life.
Day to day conversations is full of lies.
Day to day actions are full of conflicts.
So Truth and Peace are for worship.
It is our aspiration, it is our goal.
Such a big goal that we have exported it
to heaven call it divine peace!
We are ready to kill others so that they get that peace.
Sometimes in the name of peace
explode our-self in the market place
so that we get peace in heaven
Oh human, what wisdom is this!

Only Lion can get a Nobel Peace Prize in the forest!
Although a human being is only one kind of animal on this planet,
yet because of being intellectual, social, religious,
this single animal group has more diversity
than all highly populated forest kingdom can have.

Now think again, is it possible for all human beings
to live together in a peaceful way?
Talking about peaceful coexistence of all is like
telling grass and dear and lion can peacefully coexist.
Yes, but through conflict when one’s stomach is full.

But a human does not only stomach problem,
Here if you are hungry you have one problem,
When the stomach is full you see dozens of problems
Greed to annihilate all businesses around and
become the greatest, the grandest, the best,
the richest, the most powerful, the first
is much more dangerous than stomach problem.

To achieve all above all ways are fine!
Because we are virtuous.
Chosen by God. Directed by God.
Who told you that?
I don’t need any approval and certificate for that!

I know my God from heaven told me that
I am chosen being.
My community is chosen one.
My land is promise land, from here all go to heaven!
This is arrogance in ignorance of human.

You think back in the history of 5000 years of human evolution
Millions of small or big, written or
unwritten war happen on this planet for peace.

That is why it looks, peace is another political term
Everybody wants it but at their own terms for other
And at any cost for themselves.

What is Deva and What is Asura?
Don’t break your head on this.
Everybody calls himself Deva and
opposite qualities of him as Asura.

Sages have spoken written volumes on this,
but when it comes to practice, I define myself the best way.
Stories are ok, but I don’t think Ravan ever told that I am Asura.
Neither you will be able to convince Osama bin Laden
or Hitler in any argument that they are wrong.
They were right, they wanted peace for themselves and their community.
Others were Asura for them
but they lost the war so the winner called them Asura
and the winner became Deva.

There is nothing right and nothing wrong,
There is one eternal friction between two opposites in this nature.
The friction is to bring peace for themselves.
This is like equilibrium in a chemical process.
Nothing at rest, nothing is right, nothing is wrong,
Just countering each other in the name of Peace and Truthfulness.
It is about the Peace but “Not the Peace for All”.