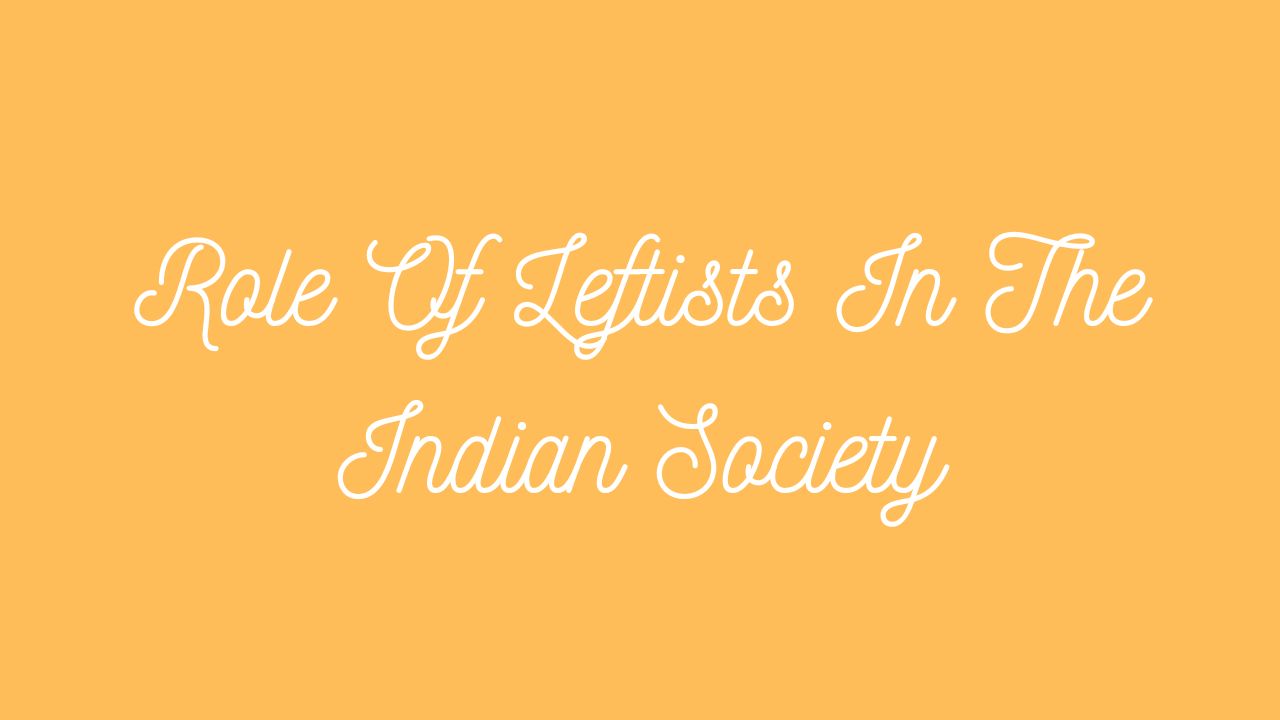 Role Of Leftists In The Indian Society

Based on our understanding of life,
the environment around and our value system,
We may choose to apply X thought
or Y thought on the concepts of
nation, a particular religion, caste of people, color of people,
geography of people, nationality of people,
praying method of people, and the belief system of the people.

With that thought process, we level
the people, religion, culture, and societies around.
If we are powerful and dictator then
we can enforce and spread our idea to the masses
And force them to follow our idea
or tell them to be ready to lose their life.

If we are democratic then we use another method
to enforce and spread our idea to the masses.
If certain people don’t follow my ideas then
We outcast them or keep trying with them
till the time we are living or other is alive.

Human society will always have different kinds of mind
Sometimes these minds are so much radical to each other
That, it looks one will survive only if the second die.
For that, they use their God-given purpose
as proof of their righteousness and finish others.

But try all with some logic, some common sense, some humanity.
Show others the benefits of your ideas.
Do not threaten people.
Do not use your power of any kind
to suppress permanently to an individual or a society.

If thought can be measured on an infinite scale from left to right
On the left side, we can keep Y thoughts
and on the right side, we can put X thoughts.
Start applying these X & Y thoughts
to the concept of nation, religion or a certain religion,
or certain cast, geography or certain geography of people, etc

Once you are done then
locate the center on this scale
Do this with your own perspective
And then with someone’s perspective, who you don’t like
You will find there is no center.
There are hater and lovers of every idea.

Leftists are an integral part of liberal societies
You will find them in all the democratic nations
Democratic planes are the only land where this crop can grow.

But if you compare the leftists of different nations
you will find some similarities.
They are liberal, anti-religion, humanist, modernist, etc.

Interestingly, if you analyze the leftist of Bharat
they have a unique quality,
Which none of other country’s leftist have
Leftist in the Bharat is against the idea of a nation,
patriotism, grand narrative of Bharat and anti majority.

So on a thought quality scale, you will find
Leftist of the world are centrist and
Rightists of the world are on the extreme right.
Therefore to bring balance in a society Leftists are required.

No! It is characteristic of Hindu Dharma
Listen to all ideas, concepts, philosophies,
question, discuss, debate with others,
Convince them or get convinced.

Then with new ideas and concepts
realign the center again
And keep moving
Never become rigid
So, in Indian society, what looks left or right
at some points in time
Hindu dharma traditions make sure to align themself
And masses of the Bharat lives in the center.

So the role which leftist play in other parts of the world
is not available in the land of Bharat
Because Acharyas, Gurus, Renounced Individuals (sadhus) play that role.

But, if Gurus or Acharya, Sadhus of the Bhartiya society
compromise on their role then leftists try to take that space
That is one of the reasons why leftists are against
our Gurus, Acharyas, Sadhus because in their presence
Leftists are not having the role of bringing rights to the center.